I have acquired a saddle, a bit of summer indulgence. It’s something of a mystery piece.

In general design it much resembles the classic Brooks B90/3, but it is of smaller make all round – the cover is not so large, the springs, though sturdy, not quite so stout and of smaller circumference.

Its proportions are closer to my hybrid B66

Well-made and of uncertain age, it is in sound condition, albeit somewhat crazed on the surface (much like its owner, some might say).

It does, however, have ‘handed’ springs – note how the spirals go in opposite directions, a distinction denied to the two late-model B90/3s in my possession, though I believe they used to have handed springs in the past (certainly, they still list left and right hand springs in their catalogue, though I believe only rh ones are in stock). Note that the rivets are definitely on the rear end of the saddle (unlike the B90/3 where they are more on the top), even though this adds a complication to the design – the cantle plate that they attach to on the inside appears to occlude the saddle-bag eyelets, but in fact it has two bends in it to allow the straps to pass through.

Along with the integral metal-reinforced saddlebag eyelets, a rather more labour-intensive fitting than the separate ones on the late B90/3s,  I take that to be an indication that it is fairly old and not cheaply made, but the lack of any branding is curious. The embossed stamp on the flanks conveys little in the way of information: 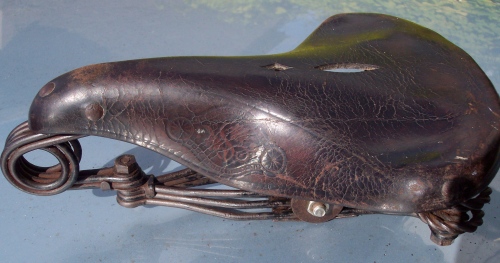 the surround, where writing might be expected, is a sort of Grecian border, with a bicycle-wheel on each end which makes it look, from a distance, like the earlier versions of the Brooks stamp. The central symbol might be a letter S interwined with a flower, 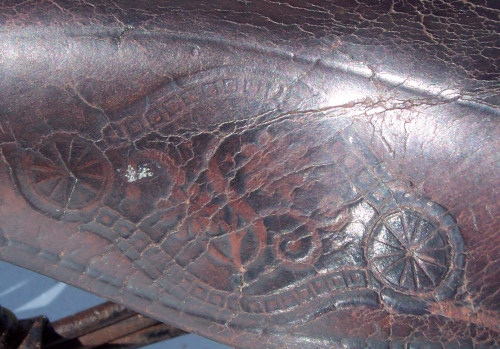 but there is something in the overall design that looks, to my eye, possibly Indian: could it be from the sub-continent?

Though the integral eyelets and handed springs hint at high-class manufacture, the cut-outs have an oddly amateurish look to them, as if they were done by hand: 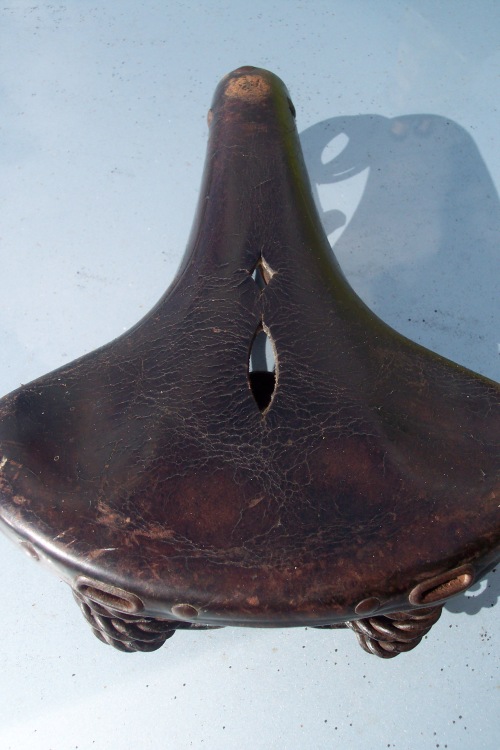 All in all, an acquisition I am well-pleased with, though I wish I knew more about it. There is nothing on the saddle clip or elsewhere on the metal frame to give any indication of its origin either. I think I will probably fit it to my 1923 Royal Sunbeam, which came to me with a nice B66 which sadly gave way. Although I like the B90/3, I do think a smaller saddle might look neater. 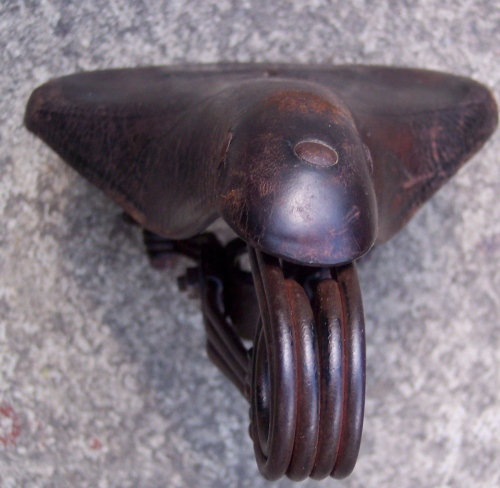 By jfmward in Uncategorized on July 18, 2013.
← In the belly of the beast The Great Sausage Mystery – or why Sunbeam abandoned the Newill Hub →

Journeys with Pattern and Colour

Towards a catalogue of London’s inter-dimensional gateways

Echoes from the Vault

the story of a book

The woman on the Yellow Bicycle

The Art of enjoying life as I pedal my bike.

Although There Really Are No Accidents

a Year of Drawing Monkeys

Intangible. Untouchable. All things to some People. And a laughable concept to everyone else...

Walk and Bike in France and Europe www.walk-bike-camino.com

A Library of Literary Interestingness