The true roadster bicycle is perhaps the one unmitigated boon bestowed by the British Empire on the world: you will find it in Africa, the Indian sub-continent, SE Asia and of course China, still in much the same form that first appeared in the 1890s and has continued with slight modification but no significant alteration ever since: 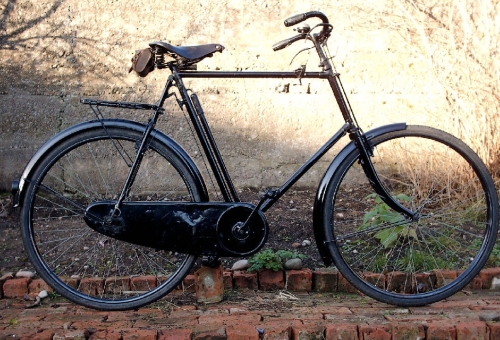 There is more to this long survival than the commanding riding position they offer and the sense of self-worth and well-being it engenders: if you have ever ridden one over an unmetalled road, you will realise that they are ideally suited to rough terrain – the big wheels cope admirably with ruts and potholes, while the built-in suspension of the easy frame and saddle protect the rider from shock and judder; they are virtually unbreakable.

These are the defining features of the Imperial Roadster: 28 × 1½” tyres on westwood rims with rod-operated roller-lever pull-up brakes; ‘relaxed’ frame angles, most evident in the head tube and the elegant curve of the front forks; detachable seat stays; chain stays with  horizontal rear-facing axle slots, with chain-tensioners; single-speed or 3 speed epicyclic hub gears (with a lever on the top tube); 7” cranks; sprung saddles and often (though not invariably) full chaincases.

(Some will have it that certain bicycles shod with 37-590 (26×13/8) tyres are also roadsters, but those are lesser machines, lacking most of the features listed above – ‘post-Imperial* roadsters’ at best)

This Blog is a celebration of four bicycles I own that are shod with 40-635 tyres, though only two are true Imperial Roadsters – the Two Noble Kinsmen, a pair of Royal Sunbeams, one from 1923, the other from 1934; the third might be called a roadster in the modern idiom (if such a paradox is possible) – the Mk III Dream Roadster, the latest in a series of attempts to realise my ‘ideal’ roadster; while the last is that true nonesuch, a Dursley Pedersen, dating from 1905.

*the last true Sunbeam Roadster was made in 1940, the year of Dunkirk; the Fall of Singapore came soon after, in 1942; the Indian sub-continent became self-ruling in 1947 – though of course the Raleigh DL1 carried on the tradition well into the modern era.